Many stakeholders see software development as a linear process — the software is written, tests are run, and the code is deployed. On the other hand, many developers know that seemingly benign changes to a piece of code can have a ripple effect across the application. Regression testing is the only reliable way to make sure that everything works.

Small changes to a piece of code can have a ripple effect across an application, which makes regression tests important to ensure everything works.

Let’s take a look at three challenges that teams face with regression tests and how to overcome them.

What is Regression Testing?

Regression tests determine if new code changes break existing functionality. The goal is to catch any bugs that may have been accidentally introduced to a new build or release candidate before they reach production, as well as ensure that any old bugs that were fixed don’t resurface. These efforts can significantly cut down on the time spent squashing bugs, as well as the number of defects that reach production.

While regression tests were traditionally performed by quality assurance teams after the development team completed their work, it became apparent that defects found after the fact were more costly to fix. Modern developers write unit test cases prior to writing any code using a test-driven development process, while quality assurance teams focus on high-level functional tests that ensure everything fits together.

Regression tests involve running tests that have already passed, which can be hard to justify to stakeholders and mind-numbing for quality assurance engineers. It’s hard to justify the time that it takes to create and run the tests, as well as the high cost of test-related services and infrastructure — especially when you don’t appreciate the value it adds.

TestComplete helps reduce the time and cost of writing tests. Using its record and replay capabilities, test engineers can create complex and scalable automated user interface tests in seconds. These scripts can then be configured to run automatically as part of a continuous integration (CI) after each new build or release candidate.

Regression tests inevitably become large and complex over the course of a complex development project. The number of test cases, as well as the functions and processes that they check, can easily number in the thousands, which makes it impractical for quality assurance engineers to test manually without consuming significant time and resources. 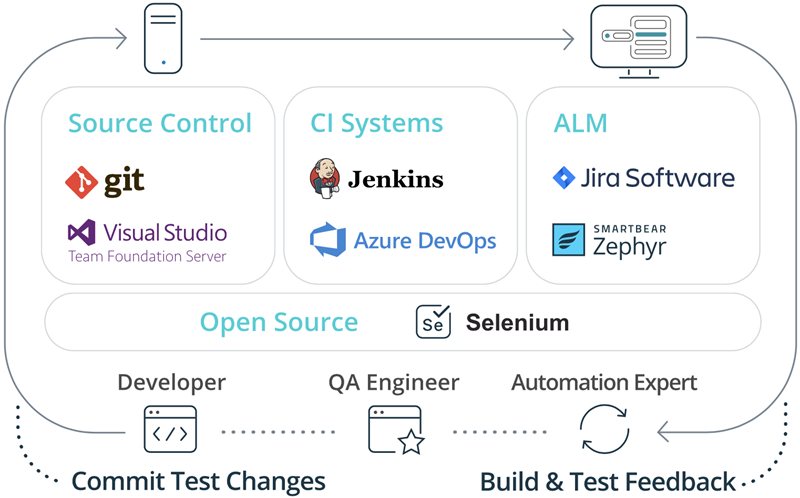 TestComplete makes it easy to automate regression tests using a wide range of different platforms, such as Jenkins. At the same time, you can manage all of your desktop, web and mobile functional user interface tests within a single application, which eliminates the need for tens or hundreds of different tools and libraries that would be required otherwise.

Regression tests are great when they identify issues before a production build, but there’s nothing more frustrating than a test suite that throws constant false positives — or tests that fail when they should pass. Brittle tests that generate false positives are frustrating for stakeholders, developers and test engineers and could make everyone second-guess the process.

TestComplete comes with an intelligent object repository and support for over 500 controls, so you can ensure that your GUI tests are scalable, robust and easy-to-maintain. Whereas small UI changes could break Selenium tests, TestComplete’s hybrid object recognition engine leverages artificial intelligence to detect and test dynamic elements quickly and accurately.

Best Practices to Keep in Mind

Regression tests can be challenging to create and maintain, especially with limited resources, but there are many best practices that you can use to keep things running smoothly and avoid the pitfalls that can derail the development process.

Some best practices to keep in mind include:

TestComplete makes it easy to adhere to these best practices across desktop, web and mobile devices. You can easily organize regression tests through integration with test management platforms, like Jira or QAComplete, while automating the tests via integrations with continuous integration services, like Jenkins, Azure DevOps and TeamCity.

Regression tests are an important part of the software development process, but there are several challenges to making them truly useful. Using TestComplete and other tools, you can overcome these challenges and make regression testing faster, more accurate, and more cost-effective — delivering the full benefits of Agile development.

Download a trial of TestComplete today to see how easy it is to streamline your functional UI tests.